Achates Power was recently awarded a $5-million contract from the US Army to expand the family of opposed-piston engines for military vehicles. The project, awarded in late-2020, builds upon the success of the Advanced Combat Engine (ACE). (Earlier post.) The US Army, after seeing the demonstrated capability of the Advanced Combat Engine, has committed to expanding the family of engines by creating opposed-piston engines for tactical vehicle engines.

The family of engines strategy uses a common power cylinder system across several different engine variants to address a range of power and torque requirements in order to serve multiple military vehicles with a common architecture.

Achates Power will begin the study and design of the initial tactical vehicle concept engine and has selected Southwest Research Institute (SwRI) to contribute its expertise in advanced materials to reduce heat rejection and improve power density and efficiency.

We’ve shown with our work on the Advanced Combat Engine that the Opposed-Piston Engine is a superior engine with increased power density and efficiency in a reduced package size, which allows the Army to better engage and evade combatants. Building the family of engines strategy around the Opposed-Piston Engine architecture further allows the US Army to leverage part commonality across the engine architecture platforms for logistics, spare parts, training, and more, further reducing concerns while conducting missions. Moreover, developing engines for both military and commercial vehicles allows us to advance the overall capability of opposed-piston engines more quickly.

Achates Power is partnered with Cummins, Inc. to develop the Advanced Combat Engine for the US Army. The ACE project delivers a significantly more capable engine for combat vehicles and will be running as a vehicle demonstration in a Bradley Fighting Vehicle later in 2021. 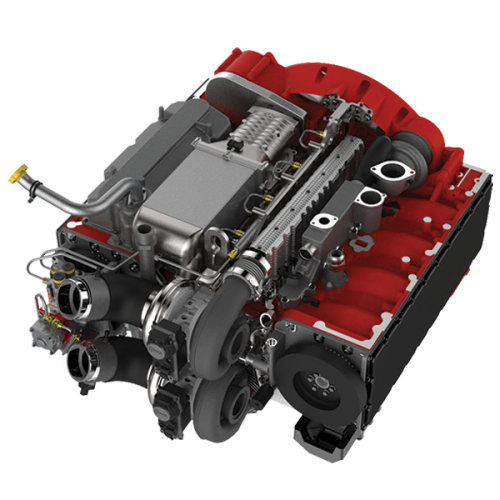 In December 2020, Achates Power announced that their 10.6L heavy-duty commercial vehicle project had achieved both the ULNOx and CO2 reduction milestones using conventional and cost-effective aftertreatment systems, and that vehicle integration was proceeding. Demonstration vehicles will be on the road in 2021 in commercial fleet application. (Earlier post, earlier post.)